In a Feb. 5 interview with The Catholic Spirit and The Visitor, newspaper of the Diocese of St. Nube, Adkins outlined the MCC’s top three priorities for the legislative session:

MFIP is the state’s basic welfare program for low-income families with children. The cash assistance has not increased since 1986, including adjustments for inflation.

“We think especially because of the major increase in the cost of living for essentials since then that that’s a prudent thing to do, especially in a time of budget surplus,"Adkins dijo. “We always have to prioritize the needs of the poor and vulnerable in our public policy choices, especially in our spending decisions, and that’s really a top priority — working with other groups to ensure that’s part of our supplemental budget or any spending that gets passed.”

The MFIP awards assistance based on the number of family members in a household. A family of four is eligible for $1,207 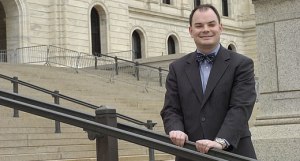 por mes, con $586 for food and $621 in a cash grant. The average monthly cash assistance awarded by the program is $348 por familia. According to the Minnesota Department of Human Services, the program is intended to help families move to financial stability. Parents are expected to work to be eligible for the program, and most families have a lifetime limit on MFIP of 60 months. En 2014, 24,752 adults and 60,154 children received cash assistance.

Adkins said public awareness is growing around commercial surrogacy, the practice of women gestating a child implanted through in vitro fertilization for another party at the cost of tens of thousands of dollars. With that awareness is the question of whether Minnesota should recognize surrogacy contracts with law. A 2002 task force on the Uniform Parentage Act stated that “additional analysis and legislation are needed to address public policy concerns involving gestational agreements, including whether such agreements should be permitted by law.” But according to a coalition that includes the MCC, “no meaningful analysis has been done.”

Minnesota law does not address surrogacy. Because neither the state nor the federal government regulate the fertility industry, the number of annual surrogacy births in the state and country is unknown.

Mientras tanto, other countries, including Canada, México, Alemania, France and Switzerland, have banned or restricted commercial surrogacy, and the European Parliament recently described the practice as one that “undermines human dignity.”

The Australian government recently launched a parliamentary inquiry into surrogacy, and Adkins said if they can study the issue “Down Under,” Minnesotans should be able to do it “Up North.”

“We think this is a serious issue about which much more conversation and debate needs to happen,"Adkins dijo. “We’ve been proposing a legislative commission to really be an independent fact-finding body to study the many, many facets of surrogacy — market dynamics, the potential for commodifying women and children, and the many concerns being raised because of this industry all over the world.”

A bill supporting the legislative commission has passed the Minnesota House of Representatives and must pass the Senate Judiciary committee before it goes to a floor vote.

The Catholic Church in the U.S. has long advocated for more parental choice in education, ensuring that the state does not monopolize the educational process and parents are recognized as a child’s “first educators,"Adkins dijo. The MCC wants parents to be able to enroll their child in the public or non-public school of their choice.

“No child should have to suffer through a bad education simply because of his or her ZIP code,"dijo. “We need to empower parents to give them the opportunity and the tools they need to find an environment where their child, their son or daughter, can really succeed.”

The MCC is part of Opportunity for All Kids, or OAK, a coalition of non-public school entities formed in 2015 to advocate for school choice.

Expanded school choice could also help close the achievement gap between low-income students and the general population, Adkins dijo. Wealthy people have school choice, dijo, because they can afford to send their kids to the school they want. People with low incomes, sin embargo, often have fewer options, despite open enrollment and charter schools.

“We think this is a big civil rights issue,” he added, “because poor education and failing schools disproportionately impact people of color in many instances, and so how do we help close that achievement gap? We think creating more options is a better way of doing that.”

Expanding school choice also improves the common good by strengthening the marketplace for education, Adkins dijo. When students can go to the school of their choice, “we’re going to have a stronger and better-educated workforce in the coming years, and that boosts Minnesota’s economy as well,"dijo.

He said the issue has the most traction it’s had in 20 años. During now-dead negotiations around a 2016 special session, legislators discussed the issue of expanding education tax credits through the lens of racial inequality.

“What we’re trying to do is get the existing tax credits to also include tuition, raise the credit, and at the same time, raise eligibility,"Adkins dijo.

As the public policy voice of the state’s Catholic bishops, the MCC is also working on broader issues, including how, in the Year of Mercy, to apply mercy to public policy.

When speaking about mercy, Adkins is quick to distinguish between “true mercy” and “false mercy.”

“True mercy can be a powerful way to enrich justice,"Adkins dijo. “Not only can it make justice more than simply the application of impersonal commands, but it can [also] help heal and restore right relationships, y, finalmente,, that’s the true aim of justice and should be the true aim of our laws.”

Adkins sees that understanding of mercy as particularly applicable to the criminal justice system. He said the MCC is working to build on some of its prior efforts — such as working to restore voting rights to people who have been convicted of felonies and “banning the box,” or eliminating the criminal record check box from job applications.

The efforts are designed to help people leaving the criminal justice system have more opportunities to rebuild their lives and for community healing, Adkins dijo.

Now the MCC is turning its attention to mass incarceration policies. “Are these policies just? Are they prudent? Or do they do more harm than good?"Adkins le preguntó. “From the economic standpoint, it seems more and more the case that we simply can’t afford to be incarcerating people en masse. We have a population explosion [y] we have a bed shortage, so what are we going to do about it? Are we going to build more prisons, or find more productive ways to deal with [people who commit minor offenses]?”

More research is showing that it may not be in the public interest to sentence to prison, por ejemplo, people convicted of possessing or selling small amounts of illicit drugs, Adkins dijo. “It’s actually counter-productive; you’re putting people in a pipeline that puts them on a negative trajectory, particularly young males from minority populations,"dijo.

Adkins is interested in addressing underlying questions, such as how high incarceration rates in the black community affect families, how addiction can be addressed outside the criminal justice system, and how to stem addiction-related deaths.

“Mercy helps us think concretely about justice as right relationships, but it also can help us think about policies more broadly by thinking about the ways we’ve received mercy, and then viewing public policy through that lens as well,"dijo.

While criminal justice should be viewed with “true mercy,” physician-assisted suicide is often presented with a false understanding of mercy, Adkins dijo.

“Sometimes people look at physician-assisted suicide, or euthanasia, as ‘mercy killing,’ and it’s not merciful at all,"dijo. “Compassion really means ‘to suffer with’ someone. Sending someone home with a vial of pills to die, and perhaps even die alone, is not compassion, it’s not humane.”

El año pasado, State Sen. Chris Eaton (DFL-Brooklyn Center) introduced the “Compassionate Care Act” to permit doctors to give dying patients drugs with which they could take their own lives. Backing the bill is the national organization Compassion and Choices, formerly known as the Hemlock Society. Adkins doesn’t expect the bill to pass this year, but he said the issue should be discussed.

Minnesota is “one of the best states for health care,” Adkins added. “There is no need to enact physician-assisted suicide.”